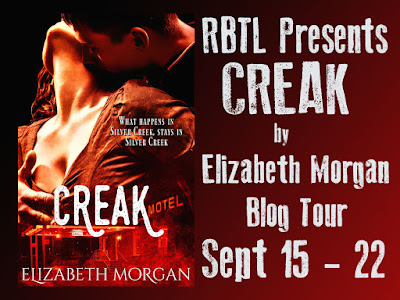 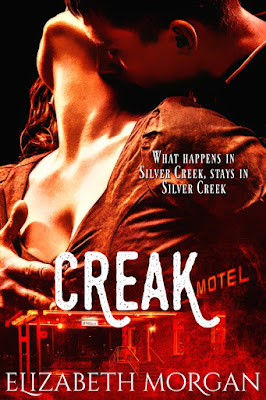 Title: Creak
Author: Elizabeth Morgan
Series: Standalone
Genre: Erotic Suspense/Ménage
Publisher: Self Published
Release Date: September 7th 2015
Edition/Formats It Will Be Available In: eBook & Print
Blurb/Synopsis:
“What happens in Silver Creek…stays in Silver Creek.”
After spending the summer as a recluse due to a bad break-up, Nicole Saunders agrees to go to The Heat Wave Festival with her best friends, Kacey and Tyler.
Along with three other friends, they plan to take a shortcut through the small town of Silver Creek. The last thing any of them expect is to become lost and end up pulling into a motel for the night.
The Creek Motel is isolated and the last place Nicole wants to be, especially after meeting the glacial owner. But her discomfort is soon forgotten as she finally gives in to her feelings and asks Kacey and Tyler to spend the night with her.
This should be bliss, but it quickly turns into a nightmare when she discovers that one of their friends has mysteriously disappeared from her locked room in the middle of the night.
Worried, Nicole presumes the worst, but she will soon discover that isolation can be the perfect stage for those who have something to hide…and that Jayne's disappearance is more disturbing than any of them could have guessed.
****CONTENT WARNING****


This title contains explicit language and scenes of a sexual and/or violent nature which some readers may find disturbing.
Excerpt

I pressed my head to the wood, mentally preparing myself for the hard stare of a nosey redhead, but when I turned round, I found an empty bed.
“Jayne?”
No reply.
I walked over to the bathroom and pushed the door open only to find the small room empty. My unease began to twist further as I looked round the room. The dishevelled covers and pillows confirmed that I wasn’t going crazy and that she had been in bed, but her case appeared to be missing. I pulled the door to the built-in wardrobe open, hoping like hell she was playing a childish prank to get back at me for my absence, but found it empty, and strangely cold.
A knock on the door caused my heart to flutter. “Who is it?”
“It’s Shauna.”
I walked over and unlocked the door, pulling it wide. “Is Jayne with you?”
Her brow furrowed. “Er, no. I actually came to see her.”
“She’s not here.”
“Well, where is she?”
“I don’t know.” Guilt stabbed at me. “I, er—I kinda couldn’t sleep so I went and had a few drinks and then crashed with Kacey and Tyler last night.”
Shauna arched a perfectly plucked eyebrow. “You guys got wasted last night? You should have told us. We were so bored.”
I shrugged. “We thought you two would want some ‘alone time’.”
She snorted. “Oh, heck, Craig’s good, but he’s not that good. Trust me. Getting wasted would have been a nice break.”
I looked round the room. “I locked the door behind me, so how did she get out?”
Unease began to rapidly turn in my stomach.
“Maybe she climbed out of the window?” Shauna walked over to the window and pulled the curtains open—a single panel of glass had been welded to the frame. “Okay, maybe not.”
My gut twisted. “Oh, God, what if something’s happened to her? What if someone broke in and—”
“Nikki, be serious. You would know if someone had broken in. The window would be smashed, or the lock on the door would have been broken.” She walked over to the bathroom doorway and glanced inside. “And your bathroom window is as small as ours is. So, no one got in.”
“What if the lock was picked? What if—”
“Are you seriously suggesting that someone picked the lock, kidnapped Jayne, and then locked the door behind them? That’s insane. Plus, ten minutes with her and they would have brought her straight back.”
I wanted to find this ridiculous. I wanted to believe that Jayne had somehow gotten out and was playing a trick on me as payback, but my gut wasn’t buying it. Something was very wrong.
“Jayne was locked inside this room. Tell me how the hell she got out?”
“I have no idea, but I’m sure there is a logical explanation.”
She looked doubtful, and the sight made me all the more sick.
“Something’s happened to her. I don’t know what, but—” The steady humming of wheels caught my attention. I turned and looked at the window, watching as Sarah’s shadow moved across the closed curtains. “I saw someone outside Kay and Ty’s window last night. I don’t know who it was. One of the other guests, or maybe the owners…and they have spare keys, don’t they? Technically, they would be the only other people able to get into this room—”
Shauna appeared in front of me. She grabbed my arms and looked me dead in the eyes. “Nikki, you’re talking crazy, and it’s starting to freak me out. I don’t know what happened, but let’s not jump to conclusions. There has to be a reasonable explanation for this.”
She let go of my arms and glanced round the room once more as if there was some corner I had forgot to check. “Just get ready and go get Tyler and Kacey.” A faint smile fluttered on her lips as she looked back at me. “Craig and I will go check at reception and ask the owners if they’ve seen her. Okay?”
I nodded. “Yeah, all right.”
“Just relax. She could have gone for a walk or something,” she stated before disappearing from sight.
Perhaps, but that still didn’t explain how she got out of a locked room. 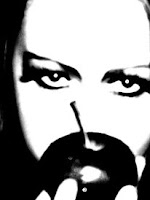 Posted by Between the Pages One Book at a Time at 2:00 AM