Chapter 4 & Review Sonar the Cyclone by B Truly 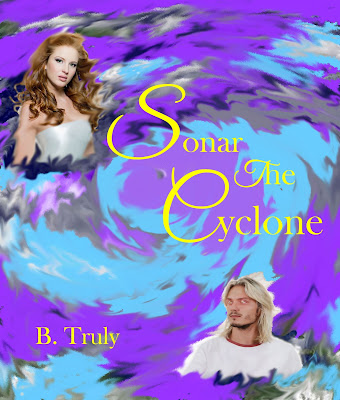 Title: Sonar the Cyclone
Author: B Truly
Series: The Sonar Series (2)
Genre: New Adult, Paranormal, Romance, SciFi
Publisher: Self Published
Release Date: July 3 2015
Edition/Formats Available In: eBook & Print
Rating:
Blurb/Synopsis:
Is your destiny determined by what the future has foretold? Or is fate deemed in the hands of what you behold?


The Royal 4 are now back on their home territory of Nazari, determined to get things back to normal. Syira’s forbidden love is being held captive. She is hell-bent on fighting for him despite the immense obstacles. She must find a way to convince her race that Kadeem is not dangerous. Their threat lies from deeper within.
Shiray has accepted her past and is moving forward with her life, but it comes back to haunt her tenfold. That all changes when she stumbles across the truth. Now, she must pick up the pieces of her shattered life.
They are in the calm but know when they approach the dirty side of the Cyclone storm, terrible things will unravel. The future is revealed and they get a glimpse of Fate’s course. Time is not on their side. They must attempt to change their destiny or their world will be doomed.
Chapter 4

I awoke the next morning disappointed I couldn’t connect with Kadeem. Maybe the distance was too great. I wondered what his planet was like. He’d told me it was cold, barren, and they lived underground. I wondered how it was similar to ours and how it was different. I didn’t think there were too many things that were the same. I wanted to know why his father wanted to take over our planet. Maybe we could share my planet. We had plenty of room. Our planet was a lot bigger than theirs, but they had more people than us.
I climbed out of bed and got ready for combat training. We trained every morning now because of the pending war. It was hard to concentrate in practice. It was frustrating, because my thoughts kept drifting back to him. Tonight could not arrive fast enough.

“Syira. What’s up with you today?” Shi asked, pulling me from my reverie. We were now at the dining room table having lunch.
“Huh? Oh, I was just in deep thought.”
“I can see that. What’s on your mind?”
Bryan and Nile were also sitting at the table across from us. They were heavily immersed in conversation and weren’t paying attention to me.
“I was thinking about how everything is changing. I hope it will blow over.”
“Yeah, it’s scary. Their race is very arrogant, though. I think their cockiness will allow us to get the upper hand.”
“But their technology is more advanced than ours.”
“True, but still, I have faith in our planet.”
And I am falling for the enemy’s son, I thought. There had to be a reason we met the first time he was sent here to spy. God wouldn’t be so cruel. It couldn’t just be a coincidence. I wanted to see where all this would lead.
“Syira, seriously, are you okay?” Shi asked again.
“What are you two talking about?” Bryan asked, beaming lovingly at Shi. She smiled back with the same admiration. Those two were so in love, and their love seemed to grow stronger every day. I longed for what they had. I was nineteen years old and I had yet to have a serious relationship. Well, not one where I wanted it to get serious.
“We are talking about different issues at hand,” I answered Bryan.
Nile jumped right in. We chatted for a while longer. Then it was finally time to sneak away.

That night, I lay in bed, at odds with myself. These emotions I felt toward Kadeem were overwhelming. Of all the Kadanan men I could choose from, why did I have to fall for the enemy’s son? My world was spiraling out of control. It was stressful, because in order to be with him, I had to sneak around. Maybe I should end it now. But that thought sent an aching pain to my chest. No, I didn’t think I could. How depressing. I would always wonder what if. I needed to see how this played out. I would just have to continue to be very discreet.


WOW I really enjoyed this book. I will have to go back and read the previous installments and I am looking forward to the next installments. B Truly has fully captured my interest

WOW I really enjoyed this book. I will have to go back and read the previous installments and I am looking forward to the next installments. B Truly has fully captured my interests with this series the characters are so believable the world created is spectacular. I devoured this book and it left me craving more.

I have wanted to be an author since I was fifteen years old and grateful to have accomplished this dream. I have three wonderful children and a husband who defines the person I am today. I work full-time as an Ultrasound technologist in Sugarland, Texas.

I have very vivid dreams and a wild imagination. I like to read, watch tons of TV shows, and movies. I’m addicted to romance and get a thrill out of action and suspense. I write New Adult Fantasy, Sci-fi, and Paranormal-Romance.

In the Sonar series it was fun to explore different elements of Sci-fi romance and create various realms of powers for my characters. I want to show my readers that Sci-fi can be fun, but also traumatic. I hope you guys enjoy the Sonar Series.

Posted by Between the Pages One Book at a Time at 12:00 AM