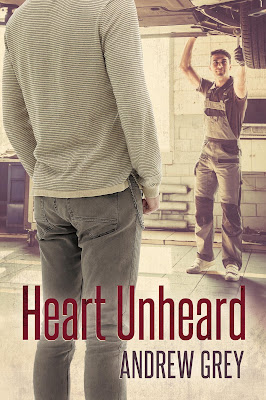 
Blurb/Synopsis:
The attraction between Brent Berkheimer and Scott Spearman peels the wallpaper, but Brent is Scott’s boss, and they’re both too professional to go beyond flirting. Their priorities realign after Scott is badly injured in an accident that costs him his hearing, and Brent realizes what is truly important… he wants Scott.
Scott first pushes Brent away, fearing a new romance will just add to his problems, but perhaps he will find unexpected strength and solace in Brent’s support as he struggles to communicate with the world in a new way.
Just as they decide the chance of a happy future together is worth the risk, Scott and Brent discover darker challenges in their way—including evidence that the “accident” Scott suffered may not have been so accidental.

“Is that what you did?” Dean ruffled his hair like Brent was a kid. “Come on. He worked for you, so you wanted to keep things professional.”
“Fuck that. I thought… think about him all the damn time. I was too afraid to say something in case he turned me down. I’m ten years older than him, and I figured, what the hell would he want me for anyway?” Brent set his glass aside. Suddenly getting drunk and trying to forget everything didn’t hold any appeal. “I’m mooning over a guy who was out of my league. We flirted and had fun with each other, but that was all it was. I was… am Scott’s boss, and that’s the end of it.” He huffed. “The rest is me being an idiot.”
Dean downed his whiskey and poured some more. “If you’re so sure about that, you wouldn’t be acting this way.” He could be so observant every now and then. “You like him, and somehow you developed feelings for him.”
Brent jumped to his feet, waving a hand. “Okay, I did. But none of that matters, and I need to get over this… infatuation. He’s in surgery right now, and he isn’t going to want me when… if he gets better.” He began pacing the room. “I’m acting like a teenager. I need to stop.” His head was going in a million directions, and he desperately needed it to settle on something, anything.
Dean set his glass on the coffee table. “Fuck it all. You know I was pissed and a bit depressed because Dumbfuck was getting married and the asshole is happy. But dammit, I’m more depressed now than I was when I walked through your door.” He snatched his glass and drained it. “I hate shit like that.” Dean leaned back on the sofa, cradling his glass.
“Let’s eat until we puke.” Brent opened the bag of Cheetos and passed them to Dean because he knew they were his favorite. Then he opened the chips and went to the refrigerator to grab a couple of beers before flopping on the sofa. He’d had enough whiskey, so he popped a beer open and drank. Brent sighed. “Sometimes I think I’m the stupidest man on earth.”
“Why?” Dean’s speech was a little slurred, or maybe it was the mouth full of Cheetos. It was hard to tell.
“Because I wasn’t gutsy enough just to tell him what I wanted. I know it won’t make a difference, not now.” Brent drank another sip of beer and then picked up the bag of chips. “I suppose we always regret the things we don’t do.”
Dean shook his head. “Yeah, I know that. I should have left Chuck long before I did.”


“You know, maybe it’s time you stop trying to screw every guy in town and find someone special.” Brent set his beer on the coffee table, turning toward Dean. “Every time I go to Trevor’s and see him and James together, I get so fucking jealous that I want to scream. They have what I want, and I can’t ever seem to find it for myself.” He crunched another chip. God, now he was sharing his feelings and shit. It must be the whiskey. “Forget I said anything. Okay? It’s not that important. Let it go.” He turned on the television and found a RuPaul marathon. It gave them something to talk about other than his feelings.

Andrew grew up in western Michigan with a father who loved to tell stories and a mother who loved to read them. Since then he has lived throughout the country and traveled throughout the world. He has a master’s degree from the University of Wisconsin-Milwaukee and works in information systems for a large corporation.
Andrew’s hobbies include collecting antiques, gardening, and leaving his dirty dishes anywhere but in the sink (particularly when writing)  He considers himself blessed with an accepting family, fantastic friends, and the world’s most supportive and loving partner. Andrew currently lives in beautiful, historic Carlisle, Pennsylvania.

Posted by Between the Pages One Book at a Time at 6:30 AM